Delays Aren’t What They Used to Be 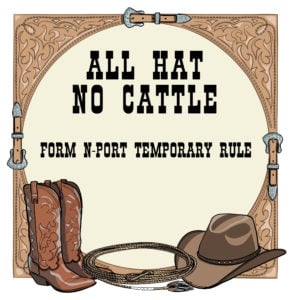 The requests were met with silence until December 8, 2017 when the SEC adopted temporary rule 30b1-9(T), which postponed the need to file Form N-PORT for nine months to allow the SEC to improve its cybersecurity. On the surface it appears to be just what the industry wanted, perhaps even needed, but unfortunately, the reality is a different story.

Cybersecurity has been cited by the industry as a concern and a justification for processing changes going all the way back to comments on the SEC’s 2015 Investment Company Reporting Modernization proposal. As the compliance date neared and reporting became real in the second half of 2017, the furor picked up steam in the form of a July letter from the ICI requesting reduced Form N-PORT frequency because “[r]ecent reports by the Commission’s own inspector general, as well as the Government Accountability Office (GAO) raise serious concerns about the SEC’s current ability to maintain the security of monthly portfolio holdings information.” That furor reached its apex in September after Chairman Clayton’s statement to Congress in which he released a bombshell: “a software vulnerability in the test filing component of [the SEC’s] EDGAR system…was exploited and resulted in access to nonpublic information.” Shortly afterwards, Reuters piled on, reporting on a confidential Department of Homeland Security assessment that “detected five ‘critical’ cyber security weaknesses” at the SEC. With all of these cybersecurity concerns swirling around, the pressure on the SEC finally led to a filing delay in early December. Sort of.

The temporary rule is labeled as a “filing delay”, which while technically accurate, is misleading in practice. The temporary rule does indeed postpone the need to send Form N-PORT to the SEC (a delay in the filing), but it does not remove the need to prepare Form N-PORT. The rule requires that investment companies maintain in their “records the information that is required to be included in Form N-PORT.” While the SEC does not require XML or any other specific format, the overall industry’s view is that they will not meet a records request by sending the SEC thirty individual raw data files. In fact, the industry is just about unanimous that despite the open-ended requirement, maintaining the information in any form other than the official Form N-PORT XML will subject them to meaningful compliance risk. So, in reality, the only thing about the Form N-PORT process that has been delayed is the proverbial pushing of the e-filing button. Any filing system worth its salt will automatically e-file as soon as the form is approved, so the “filing delay” has no practical impact on preparation at all – the things investment companies need to do in July 2018 with the filing delay in place are exactly the same as the things investment companies would have needed to do without the filing delay.

When the news of the temporary rule and it’s so-called ”filing delay” came out, the initial response was jubilation – an extra nine months for readiness! However, as you dig into the details and what they mean in practice, it becomes readily apparent that the filing delay is not a filing delay, that the new recordkeeping requirements are not new, and that the temporary rule has no impact whatsoever on readiness. Unfortunately for the industry, it seems that filing delays are all hat and no cattle.