Liquidity risk in the US and EU: Differing ideologies

Stemming from StatPro's inaugural global regulations panel earlier this month, when it comes to the relationship between regulators and financial firms in the European Union versus the United States, it’s safe to say attitudes are quite different. 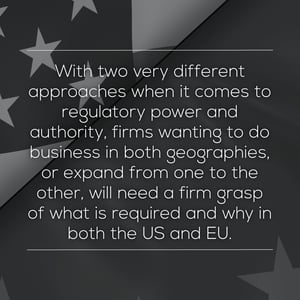 A global outlook on regulations

The global regulations panel was made up of Damian Handzy, Global Head of Risk at StatPro, Carl Bacon, StatPro's Chief Adviser and Chair of the GIPS Executive Committee, and Mattia Prati, EMEA Client Service Director at StatPro.

Broadly speaking, the regulatory burden in the US has been lighter than in most other areas of the world. This stems in part from the general US view on government: Americans have long been leery of government interference in many aspects of life. Meanwhile, the relationship between financial firms and regulators in Europe is generally more cooperative and more consultative in nature.

In the EU, the participants in financial markets tend to want to understand the regulations, so they can be in compliance, both in the letter and the spirit of the law. There’s more of a two-way, conversational relationship. In America, the relationship tends to be more antagonistic. American fund managers do not generally proactively seek the SEC’s input when ascertaining the scope or impact of a new regulation. They will instead interpret the regulation themselves, in cooperation with their legal advisers. The general mindset seems to be “Here’s another regulation we have to deal with. What do we absolutely have to do to be in the clear?”.

This duality can be seen in how firms approach liquidity risk in the EU and the US. In Europe, for example, there has been a growing concern in the market recently about the possibility of a new financial crisis. Here the regulator is seeking to mitigate this possibility by asking firms to provide, say, two reports per year, in which the firm will disclose how much of its portfolio, or which portion of its portfolio, can be liquidated within a certain amount of days. This outlook can be seen with new regulatory measures, such as MiFID II, which changes the playing field for virtually any firm that provides liquidity.

Today we’re about to see some new, similar regulations take effect for all mutual funds in the US.

The philosophies of managing liquidity

Every mutual fund now has to manage liquidity. The overarching philosophy is to make sure that these funds can meet redemption demands by the investors. This is to ensure that an investor who is getting their money out today does not negatively impact another investor who stays in the fund and may want their money a year from now. For this reason, under the new rules, the SEC has asked to create four buckets of liquidity per security, ranging from “highly liquid” to “illiquid”.

Since every mutual fund decides for itself how much of its fund is in the “highly liquid” category, that means two different funds with vastly different amounts in the “highly liquid” bucket can both be in compliance, if they stay within their own self-defined limits. This has led to something akin to game theory among fund managers, figuring out how much should go in each bucket.

With two very different approaches when it comes to regulatory power and authority, firms wanting to do business in both geographies, or expand from one to the other, will need a firm grasp of what is required and why in both the US and EU.