Taking blockchain from experiment to infrastructure in financial services

Of all the industries where blockchain technology has been proposed to revolutionize the way things are traditionally done – and there are many – financial services is the leader of the pack.

Many firms are experimenting with how to apply the technology to different financial transactions. Several banks have formed consortiums to trial blockchain projects with suggestions it could be used in areas such as settlements, cross-border payments, enforcing smart contracts and managing digital identity. 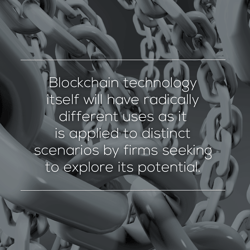 Though the general public tends to think of blockchain as nearly synonymous with cryptocurrency, specifically Bitcoin, in the financial services sector, interest is centered around how blockchain technology can be applied rather than the cryptocurrencies it powers. Blockchain technology itself will have radically different uses as it is applied to distinct scenarios by firms seeking to explore its potential. That’s the key growth trajectory industry experts are keeping the closest eye on over the next decade or so.

While regulatory uncertainty around cryptocurrency remains, regulators too have begun to recognize the value of the blockchain beyond just a means to trade cryptocurrency. In a statement issued earlier this year by the European regulator CSSF, it cautioned against investing in crypto but added that its warnings did not concern the blockchain technology used by cryptocurrencies, which it said “could bring certain advantages in their use in the financial sector and in different innovative projects.”

One such innovative application is the use of blockchain in the bond market. Blockchain already enforces smart contracts, and a bond is essentially a contract. Here an investor would be able to have a blockchain issue a bond and agree to pay another party a certain amount of money every six months, when the blockchain validates. That would be considered a “smart bond.”

However, the broader financial ecosystem and the tech infrastructure are not quite in a position to enable such a scenario. Right now, the focus needs to be on developing best practices around underlying blockchain technology – an open ledger that is entirely secure and peer-based could be, quite literally, transformative. But the use of blockchain to make the global financial system more efficient can only become reality if regulators focus on industry-wide protocols for the technology itself, beyond Bitcoin and other cryptocurrencies.

If managed properly, guidance and regulation can inform best practices and standards of use, enabling blockchain technology to be a highly effective medium for positive change in the financial services world. In order for that effective regulatory structure to take shape, regulatory bodies need to bring on board not just legal experts, but market participants that know the technology and its benefits along with its potential pitfalls. More effective and efficient enforcement will take shape as the people at the helm of creating the regulation intrinsically understand the markets that they are regulating.

This mentality has been the norm, historically, in Europe. It took the global financial crisis for US regulators to understand it, when they grappled with a dearth of experts in the SEC and other government agencies to understand what was going on in the market.

In the end, a proper regulatory framework can enable blockchain to truly transform the financial services industry wholesale, rather than just being relegated to use in a few experimental projects.